No game this week, but last week we played our third game in the new  Tour of Darkness Campaign - I just never got around to typing up the report. Rick finally made it out to a game and made another fire team leader – for an MG team!

The 173rd Airborne Brigade has been ordered to begin training for offensive operations in the Republic of Vietnam.

After some practice in airmobile operations the platoon was been ordered to set up an ambush along a trail discovered during an earlier patrol near the Bien Hoa Airbase. It was suspected that the trail is being used by the Viet Cong to haul mortars and rockets up to a nearby hilltop to fire upon Bien Hoa.

Half the platoon was to be dropped off by truck a few kilometers south of the trail in late afternoon. They were to proceed to the trail and set up an ambush just before dark in hopes of catching Viet Cong along the trail at night.

During training and patrols it was discovered that Sgt. Malone had a real knack for spotting enemy force ambushers and actual booby traps on trails (that Danger Sense edge) so he more or less has permanently been assigned pointman. Unfortunately Sgt. Malone never really did learn to use a map and compass so well (no Knowledge: Navigatrion). Their platoon commander is equally useless in finding his way around in the bush… So in very short order the platoon got hopelessly lost. Around dusk they ended up approaching a village (there wasn’t supposed to be a village on their line of march) and worse they decided it was a different village on the map and marched off in the opposite direction that they should have…

An hour or so after dark they realized their error and turned about to retrace their steps. They then followed a path leading out of the village they figured would take them to where they wanted to get to. Unfortunately the path bent off in the wrong direction and they didn’t notice it was taking them around the wrong end of a hill/ridgeline until just before midnight. Turning and heading uphill they came across a trail along the saddle between two hills just after midnight and Lt. Haverford declared this must be the place!

So they set up their ambush…

(Remember: click on the pictures for a bigger version) 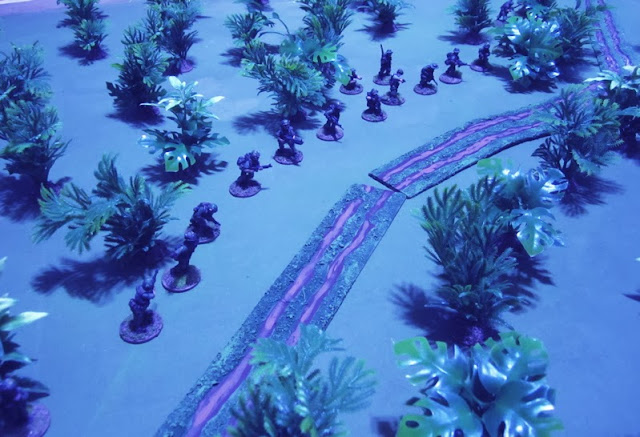 Around 1AM a local wandered along the trail – from the south to the north and NO ONE even noticed her!? She returned and hour and a half later and was spotted this time by Sgt. Thomas (I think…) unfortunately he started when he spotted someone on the trail and she spotted him hiding in the bush… they starred at each other for a minute - Sgt. Thomas not wanting to do anything because he’d been ordered not to fire until Lt. Haverford triggered the ambush. Eventually the local made off back along the trail at a slightly quicker pace. Moving right past the next position completely unnoticed. Next she wandered by Lt. Haverford’s position and while Lt. Haverford didn’t notice her, his team did and they were looking at him awaiting his call. When he finally noticed his team looking at him he asked “is it the enemy” and one of his riflemen nearby nodded so Lt. Haverford fired his pistol blindly (as he could still see no one) triggering the ambush. The night was lit up by a dozen muzzle flashes pouring hundreds of bullets into the jungle across the soldier individual firing arcs (because no one else could actually see anyone!?)

After a minute or two of firing Lt. Haverford called at everyone to cease firing when they eventually did Sgt. Malone team was tasked with searching the kill zone. A dead woman was found with a pistol shot wound to her neck. No other enemy and no weapons could be found. The woman carried no identification, or anything else for that matter, which,  along with the fact that she was out after midnight seemed to indicate she was up to no good.

Lt. Haverford had the team moved back to an RV point just behind the ambush site and proceeded south to the hill top and found a large clearing where they set up a quick all-round position until dawn. At dawn they tried to get their bearings as best they could and make their way back to the road for pick up.

Again they went wildly off course and when they finally found the road they were nowhere near where they were to be picked up and much, much later than when they were supposed to be there waiting pick up… so they headed back in the direction of Bien Hoa (or what they hoped was the direction of Bien Hoa..). A few hours later they trucks – which had been driving up and down the road looking for them – and getting mighty nervous – finally found them and gave them a lift back to base…

Christian, again, wrote his own After Action Report for 2Lt. Haverford:

A.  C/S Gridiron 1
B.  Patrol Leader - 2LT Haverford W.M.
C.  Patrol Size - 1 Officer (me), 18 enlisted men
D.  Patrol Composition - see above.  Also, 1 and 3 Fireteams, and Weapons squad.
E.  Mission - Gridiron 1 will destroy VC elements in the area of HILL 557 in order to deny them use of the hill as an OP.
F.  Departure - 1600 12 June 1965
G.  Return - 0800 13 June 1965
H.  Routes Out/In - See att map.
I.  Terrain - Think jungle crosscutted by trails and paths.
J.  Info Enemey - 1 Enemey VC KIA.  Enemey was encountered in squad strength, but got out of the Ambush area.  En was not in uniform.  En was moving from HILL 557 towards village HOE DUCK along root provided by INT.
K.  Map Correction - There are severals trails that are not marked on the maps.  See att mao.  The ravine on the east side of the rigde north of HILL 577 is a MAJOR obstacle.
L.  Misc Info - En was no match for our platoon, and was totally surprized.  Due to wild fire, the main enemy got away.
M.  Results of encounters with Enemy - 1 En KIA.  En VC had nno INT onboard.  No weapons were recovered, as the rest took it.
N.  Condition of Patrol - Excellemt.  Morale is high after our victory, and 1 PL is ready to resume offensive Ops imeddiately.
O.  Suppory received/requested - Transport to dropoff point was good, however, transport from the pickup spot was late and in the wrong place.  No other support required.
P.  Communications - The radios were used on the patrol for radio silence only.
Q.  Friendly/Neutrals - No contact with any locals was made.  Due to the stealthy nature of the patrol, we were not spotted.
R.  Conclusions/Recommendations - 1 PL performed very well.  Morale was high, feildcrraft was good, and the troops lived up to the AIRBORNE spirit.  1 PL needs to improve nightthime fire disipline, and maps and compassess need to be more used.  1PL will conduct navigation training soonest, as a minor error in navigation led to the ambush being deployed a little bit late.  The GOOD news is that 1 PL has defeated the EN VC in the area of HILL 557 for the moment.  Also, thanks for the report fprmat!

One of these days I’ll post some character backgrounds for – hopefully before a report of next week’s activities….?
Posted by tim at 11:34 PM

A local VC insurgent wandered down the trail, you mean. She had to be VC, there was a curfew on. Another victory for western democracy!

Yes, of course that's what I meant. Thanks.

This is what happens when I don't get around to writing the report until a week later...