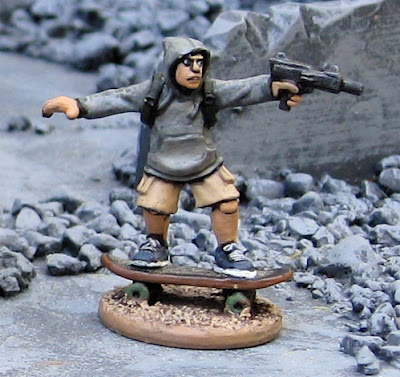 TEEN KILLED AFTER GANGLAND PARTY SHOOTOUT
Bob Smith
London Tribune
Late last night members of the gang the Peckham Boys attacked and killed Daniel Thompson, 17 years of age. Thompson had been at a party where tension between two factions of youth led to violence. Shots were fired, but no one was seriously wounded. The use of weaponry sparked panic and people quickly fled the scene. Thompson took shelter from pursuers in a store but then decided against it, leaving the building through a back door; unfortunately the group that was searching for Thompson was just outside and assaulted him at the nearby bicycle racks. The attack lasted no more than a minute but in that small amount of time Thompson suffered multiple stab wounds. Bystanders tried to help Thompson but he perished despite their efforts.

The press got it mostly right I guess, but there’s more to it than that. I’m Joey Roberts, and if the Peckham Boys had done what they’d set out to do, I’d be the one dead in an alley. Here’s why…

The story starts before I had even heard of the Peckham Boys. My mother, Mary, is a very loving woman. At one point, February in 1994, most, if not all, of this love was directed to one man.  He loved her like she deserved for that month but then he left, no goodbye, no money, no anything. I had scared him away. I was born on October 18th that same year. My mom was busy with me and had a lot of difficulty finding hours that she could work but managed to get on as a nighttime janitor with various businesses on Lye Avenue and to secure a flat on Bournemouth Close. Between raising a child and working nights she didn’t get a lot of sleep but regardless of how tired she was she always put lots of love and care into both duties. This was noticed by her employers over the years, and by the time I was five the owner of a small grocer, Mr. Stanley Roberts, had offered her a much better paying job as a full time employee in his store.

A few weeks after my seventh birthday Mr. Roberts came and found me to ask me a question. He told me that my mother had been working for him for two years now and that it was going quite well. I told him that I already knew this, I wasn’t oblivious to what my mom did during the day and Mr. Roberts son Gabriel, who was two years older than me, and I often talked when we played football with the other kids. Then he told me that he was going to ask my mother to marry him. Mr. Robert’s wife had died a quite a few years ago from and he seemed honestly interested in being married again. I gave him a lame lecture about how he had to treat my mom nicely, lame because I didn’t believe that he would. I was right.

Five years later it was 2006, and my twelfth birthday. My parents Stanley and Mary and my brother Gabe got me a skateboard. It was awesome, and a lot of afternoons and evenings from then on were spent riding back and forth on Bournemouth close, attempting various stunts. I donated quite a lot of skin to the Bournemouth Asphalt Foundation.

Over the next few years other grocery stores moved into the area and were gaining popularity. By 2010 business was declining for my parents so it was mutually agreed that I get a job. Gabe was unable to work because he was studying Business Administration at Greenwich University. I couldn’t find work at first and I didn’t want to let my family down, so I turned to crime, none of my offences were more than petty theft, just enough to make it look like I had a minimum wage job. It was during this time that I got to know the Peckham Boys, who was involved and what their territory was, I had to be careful where and who I stole from.  I had a few close calls with the police and it was only a matter of time until I got caught. Luckily for me I had kept looking for work.

I was hired by Hermes Couriers, and started work quite promptly. Within six months I had risen through the ranks and was getting more difficult but more rewarding jobs. I carried important documents for various businesses in central London and eventually was even carrying messages and documents for nobility. There was this one man, Lord Stang, who often had papers and packages delivered to and from obscure locations. He’d need a document delivered to an apparent drunk at King’s Cross station one day and then an amazingly heavy package would be sent to him from an accountant the next. I never asked questions, though I did wonder. I just rode between destinations and dropped off the package or envelope. Though sometimes it took a little work and a few questions to find the places Stang sent and received stuff from. Anyway, Stang took notice to my punctuality and offered me a job. He wasn’t specific on the job details, but it was a good offer and I needed the money.

Now, the reason that the Peckham Boys don’t like me. Stang is eccentric, he likes the superhero save the day kind of stuff, and he was looking into some gang activity in central London. So, I told him what I knew about the Peckham Boys. With this information Stang was able to uncover a major drug house and put a few people in jail, which is great. The only problem is that the Peckham Boys found out it was me who told him. Now, they’re on the lookout for me. Stang’s been able to arrange pretty good protection for my family so they’re safe for now.

What I’m really saying is maybe Daniel Thompson was at the wrong party, but that’s not why he’s dead. He’s dead because he was going to hide in a grocery store owned by the parents of an ex-criminal who ratted out some of the Peckham Boys and looks a lot like him.
Posted by tim at 3:14 PM