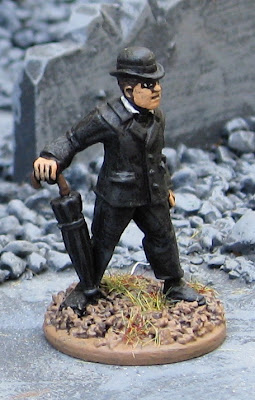 Lord Stang is a playboy, multi-millionaire British lord (Filthy Rich, Noble) that fancies himself a British Secret Agent type (like John Steed or James Bond). He also identifies with Bruce Wayne, although he finds the Batman costume a little gauche.  But he's really a bit of an airhead - not the sharpest knife in the drawer.

Not that that's slowing him down.  He's thrown his not insubstantial financial resources behind his investigative fancies.  Luckily for him, he's been fortunate enough to have some more capable associates - Leonard Tipple and Joey Roberts - who carry him (and keep him alive) through their various (mis)adventures.  Of course, Lord Stang thinks (incorrectly) that he's played a major role in leading their successes, and lets the press know about it regularly.

He's also put significant effort into acquiring a few of the gentleman sports.  He's put a lot of money into shooting, fencing, fisticuffs, and driving expensive cars.  His success in those pursuits is definitely due more to a certain natural agility - not due to mental abilities.

Lord Stang is a member of the British Paranormal Society - though his membership was granted more because of his wealth and title than because of any genuine knowledge of the occult or supernatural, which (so far) is superficial, at best.  As a member, in the early 1990's he actually met Professor Trevor Bruttenholm - a past society member of note (and founder of the Bureau for Paranormanl Research and Defense).
Posted by tim at 3:11 PM